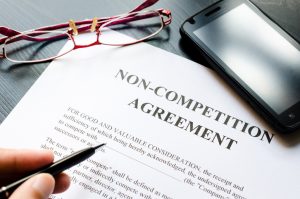 If your employer paid you not to compete against it instead of suing you, that would be a good deal?  I was reading an article  recently which contained a comment reflecting a very different approach to noncompetition agreements, as discussed below.

I do not like noncompetition agreements at all, given the wide ranging economic problems these agreements cause.  On a macroeconomic level, noncompete agreements stifle economic development in large areas of the country, Massachusetts/Connecticut vs. Silicon Valley.  California banned noncompete agreements years ago and many economists argue this was the foundation for the growth of Silicon Valley we know today.  On an individual basis, these agreements wreak havoc on career development and household income.  Employees feel powerless to fight and preserve their financial future.
I routinely handle executive compensation and employment agreements for clients.  At the top end (President and CEO), I have negotiated noncompetition pay in addition to lengthy severance pay.  At the mid-level and below, I see only paid severance and the noncompete is a tag along without any additional compensation.  I also proactively litigate against the enforcement of noncompetition agreements, suing employers first for declaratory relief and forcing employers to defend arbitrarily implemented agreements.  We have been very successful in freeing clients from these one-sided arcane agreements.

The above article captured my attention because the owner of one of the businesses cited in the article paid his employees to stay instead of spending thousands to fight to enforce the noncompetition agreement for the two departing employees. While two employees may have left, twelve remaining employees received pay raises.  This is a huge break from the typical knee jerk reaction most employers follow by sending nasty cease and desist letters and filing injunctive relief actions in court.  When employers force employees to sign noncompetition agreements, employees feel powerless, boxed in and have a low affinity for their employers.  The owner above placed the interests of the employees first before his own business interests, thus creating a stronger connection between employee and employer, and decreased the likelihood his employees would be lured away by competing companies.  More companies should consider this new approach and reject the stale and narrow-minded advice from employment defense firms to attack departing employees who violate noncompetition agreements they never agreed to in the first place.  An open workforce is better for the company, the employees who work there and for the economy at large.