Home » Employment Law Blog » Can You Be Fired for Expressing Your Political Beliefs? 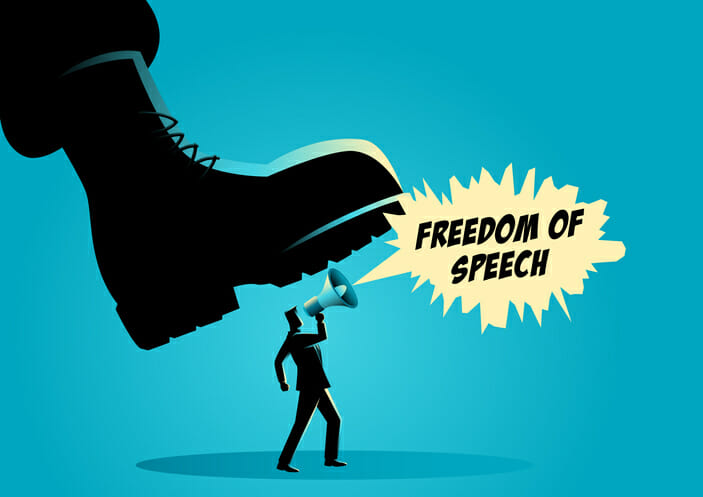 Can You Be Fired for Expressing Your Political Beliefs?5 min read

Consider the highly publicized example of a New Jersey lawyer who was “outed” as a Democratic “ringleader” by a local Republican congressman for her off-duty political activism. The now former Representative Rodney Frelinghuysen (R-N.J.) sent a fundraising letter to a board member of the bank at which Saily Avelenda worked calling attention to her off-duty political activism, none of which was connected in any way with her employer.  Frelinghuysen enclosed an article that quoted Avelenda with a handwritten warning that a member of one of the groups challenging him worked in his bank.  Although Avelenda was not disciplined directly, her employer required that she write a statement to explain her political affiliations and activities. She resigned shortly after due to pressure she felt at work after having been targeted.  Unfortunately, private employees in New Jersey are not protected against employer retaliation for off-duty political activity.

Contrary to common belief, the First Amendment protects only public sector workers from termination based on their political expression. While there is no federal law explicitly covering all off-duty political activism, the National Labor Relations Act protects private sector employees from retaliation for union-related political activity. However, “purely political” speech unrelated to union activity is not protected.

Although private employers are free to regulate most political speech in the workplace under federal law, many states, including North Dakota, Colorado, New York and California have enacted prohibitions against interference with an employee’s lawful off-duty political activities.  In these states, employees cannot be discriminated against based upon their political affiliation or political activity.

What Is Considered Political Activity?

The very definition of “political activity” varies from state to state. While the majority of states consider voting rights to be protected as “political activity”, states such as New York have extended this definition to include running for public office, campaigning for a candidate for public office, and participating in fund-raising activities for the benefit of a candidate, political party or political advocacy group.

Connecticut Provides The Most Protection For Political Speech

Connecticut’s free speech statute is the nation’s most expansive in terms of the protection it affords private employees for political speech. Connecticut General Statute § 31-51q extends the same speech protections to public and private sector employees, prohibiting employers from disciplining or discharging them “on account of the exercise by such employee of rights guaranteed by the first amendment to the United States Constitution . . . provided such activity does not substantially or materially interfere with the employee’s bona fide job performance or the working relationship between the employee and the employer.”

The statute allows an employee who believes that he has been retaliated against for exercising his right to free speech to sue his employer. However, the language of the statute has been open to broad interpretation since it was enacted in the 1980’s.  First, other than in the obvious situation of discharge or demotion, an employee must show that he has been subject to some form of discipline by his employer. Second, the employee must show that he was speaking on his own behalf as a private citizen, not in connection with his job.

How To Prove Your Freedom of Speech Was Violated

Not all politically related conduct involves a matter of public concern. For example, D.C. law only protects political activity that is related to affiliation with a recognized electoral political party. Therefore, an employer is not prohibited from firing an employee based on his political activities in connection with a non-electoral white supremacist organization, for instance. As one federal court reasoned, “political” speech is aimed at government conduct rather than merely expressing a hateful opinion about members of a particular social group.

Finally, an employee’s political expression is only protected to the extent that it does not “substantially or materially interfere” with the employee’s job performance or working employment relationship.  An employer cannot be forced to keep an employee who is connected with a group espousing hateful ideology. Court have invariably presumed that such ideologies “substantially or materially interfere” with the workplace relationship by creating a hostile work environment for other employees and business associates.

To date, there is no Connecticut case law addressing the interference of off-duty political activities with a private employment relationship.   However, in the context of government employment, the Second Circuit Court of Appeals followed the Supreme Court’s lead in concluding that unless the employer demonstrated “a vital interest” in firing employees based “on political belief and association, doing so plainly constituted an unconstitutional condition”.  In the case of the employee who participates in hate speech off hours, his employer certainly has a “vital interest” in avoiding any association with such views, which would likely hurt the business.

Can You Be Fired for Expressing Your Political Beliefs? If you believe you have suffered at work because of your political activities, contact our office (203) 255-4150, send an email to info@capclaw.com, and speak to one of our employment attorneys. You may be protected under the law, particularly if you work in Connecticut.

WSJ Article: Is Political Speech Protected in the Workplace? Here’s What You Need to Know: Quoting Mark Carey

Freedom of Speech in the Workplace

The Employees’ Field Guide to Protesting: What you Need to Know Before the Rally